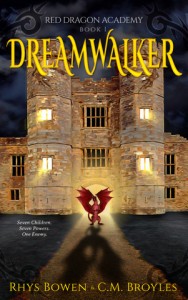 Dreamwalker is the first book in the RED DRAGON ACADEMY series that Rhys is writing with her daughter Clare Broyles.

Clare is a talented composer of music/songs/opera and has now turned her talents to a delightful middle grade fantasy series.

“FILLS A HARRY POTTER-SIZED HOLE IN MY HEART.”

Addy is a normal California surfer girl until her mother dies and her British aunt sends her to Red Dragon Academy—a strange boarding school in the mountains of Wales. There Addy meets an assortment of kids who seem to have been lured to the school for some purpose.

At first the school is odd but not unpleasant, until Addy discovers one hallway that leads not to another part of the school but to another world—a mirror universe called Gallia. This place is ruled by a terrifying being who controls minds. Addy has always had vivid dreams and now it seems that she is a Dreamwalker—a power most feared by the ruler who calls himself THE ONE.

To purchase Dreamwalker as an e-book or a paperback use the following links:

Today I posted a message of optimism about the new regime. It received messages saying they hoped I was not going to politicize my page. Also some messages filled with hate and lies.

So I thought I'd make some things clear. I have no intention of ever politicizing my page. It is a conversation between me and my fans. However it is also MY PAGE and I have an absolute right to express my joy on a momentous occasion which meant a lot to me.

I welcome those of all political persuasions and faiths to my page. I welcome healthy discussion. I have had many friends who lean both right and left. I see good in both parties. I am sure that President Biden will do things that annoy me, just as Reagan and Bush did. But they were all decent men and I admired them for taking on the office.

What I will not allow on this page is hate filled misinformation. I wlll not allow disrespect of an elected leader. Respect is the key word. We should respect each other, respectfully agree to disagree at times. Not make up slanderous and outlandish false facts.

If you do not agree with this please do not visit this page again. ... See MoreSee Less

I feel so bad for you to have to have read those comments. It's so easy to be unkind when we are not face to face.

Sadly there are still people who cannot disagree with someone without being disagreeable in the process. But overall...this is YOUR space and you should absolutely maintain your own standards.

It is sad to see the division the past occupant of the White House caused, and even sadder that his followers aren't able to understand that. Appreciate your words, and enjoy your books. I'm looking forward to reading your next one.

So well put. Thank you, Rhys. I know that no politician gets his (or her) way on everything he (or she) wants, but I am willing to hear people out and see what happens. Thank you for supporting respect and clear information.

Beautifully said. It’s unfortunate that you had to even state this. It’s time for healing and truth.

Well said Ms. Bowen. It saddens me that there is so much disrespect and hate in this world. But I CHOOSE LOVE AND KINDNESS! Be well. ❤️

Well said. Agree with respectful discussion. It’s your page. Visitors should respect it as they would visiting your home.

Today was a wonderful day, voices of hope. I loved seeing President Biden and Vice President Harris with their families around them. The day ended with an amazing display of fireworks with Katy Perry. Thank you for your comments. Best Wishes for Happiness and Good Health and lots more books. Any Evan Evans books in the works or do you feel his story is complete? 🇺🇸🤩

So sorry that you had to deal with such foolishness and rancor. I'm with you, today was an historic day and the celebrations left me feeling uplifted and cautiously hopeful. ❤

Love and kindness will always win the day. Yesterday’s inauguration was a show of the American spirit.

There is a great deal of optimism right now and we should be able to voice it. Your characters would certainly voice theirs. (Well, Georgie will be demure. But Molly definitely would). Optimism is a good thing.

I am not a member of his party but everybody in their right mind hopes the current President does well! Their performance on our behalf affects all of us!

Amen. I’ve encountered a lot of vitriol on several threads today. Truly vile comments. Blocked them as I found them. Reported to page admins where I could, etc. 💕

well expressed .... i am hopeful of our next years but disheartened with the attitude and continued beliefs of falsehoods by many .....

You have many fans who very much appreciate you and respect whatever views you may have.

I really loved your earlier post. I'm sorry your optimism was met with such negativity. Thank you for making your page a safe place for all!

Thank you, Rhys. I am always happy to see your posts. Your posts will continue to make me happy and knowing that I don't have to worry about being bombarded with terrible negativity makes me feel safe.

Please don’t worry what ignoramuses say or think. You have every right to express your pleasure that a good and very capable man will replace Trump.

Well done!! Kindness and consideration for our fellow man is greatly needed Now. Perhaps a change may allow that to grow, hopefully. 🇨🇦

Well said. I’m in Australia so I’m not in a place to comment. Only that it is your page and you should be respected for your opinions.

So sorry that you had to be on the receiving end of misplaced anger. I appreciate a political free page that's a relief to visit! Keep posting goodness and optimism ❤️

So sorry you received hateful messages and lies. I too was so happy to welcome in the new administration today and am hopeful that things will look up especially with the vaccines- stay hopeful!

Well said. I have seen other fan pages issue messages of hope today and then alter them and take them down with a follow up message apologizing for “politicizing” their page. I am gratified to see your different view on this. Your page, your choices!

Thank you for your comments. They are well said.

This is a day of good news:
This email just came for me!
Hi Rhys,

I'm thrilled to tell you that THE TUSCAN CHILD has now reached over 750,000 readers!

HUGE congratulations from all of us at Amazon Publishing.

We are so excited to be able to present you with Lake Union Publishing's Sapphire Quill Award to commemorate this amazing milestone and will get that shipped out in the next few weeks.

Congratulations! That was a wonderful story.

I enjoyed this book so much!!! Congratulations to the author!!!

They don't take into account the many readers who borrow your books from the library. I am retired and would love to buy every book from authors like you but cannot afford that pleasure so library borrowing it is.

Well Deserved Congratulations🎉 Wonderful book! Flustered hubby as I really couldn’t put it down, I stayed up almost all night reading it❣️❣️

Congratulations, Rhys ❤️ 100% Deserved!! I actually surprised it is not more! The Tuscan Child is one of your best!

I enjoyed the book very much. Congratulations

Mazel tov, Rhys. What super news today!! You deserve all of the honors.

This one and Above the Bay of Angels are my all time faves of yours.

Congratulations, Rhys! I loved the book so much that I didn't want it to end! ❤

Wow, congratulations! I listened to it, and found it one of the best books written and performed.

Congratulations, Rhys! It is a great novel!

It is a wonderful book! Kept me guessing & totally engaged til the last page & then I wished it would go on forever!

Loved the book! It is a great story!

Congrats Rhys Bowen, we keep looking up more good news like this, once more congrats

Tuscan Child is definitely one of my faves. Glad so many others enjoy it.

Going to read it next week!!!!

I’ve recommended you to both my mother and sister and they’re loving you books.

That was the first book of yours that I read and I loved it!

It's a wonderful book!

I loved that book !

I loved that book!

This is what today feels like to me! ... See MoreSee Less

I felt the same friend. She is so genuine and kind. 💜 every moment.

Sorry people got so hateful. I appreciated the photo and the sentiment.

And with thy spirit.

That’s the light you could barely see from the tunnel.

What a beautiful day God gave you!

A picture is worth a thousand words.

Right there with you

Relly the wether is amazing. !!