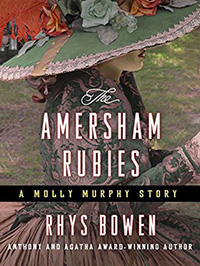 Before Molly Murphy crossed the Atlantic or even had an inkling that she might someday become a much sought after private investigator in New York City, young Molly lived in Ireland in a small cottage with her father, brothers and little else.

While keeping herself and her home together, Molly receives a request from Lady Hartley—the lady of the country estate where Molly lives, and the family that employs Molly’s father and brothers. The Hartleys are hosting a ball at their manor house, and there will be so many fine gentlemen and ladies in attendance that Lady Hartley needs Molly to help some of her guests prepare for the ball.

Beautiful debutantes, dresses of the finest fabrics, and sparkling chandeliers are all on display, as are heirloom jewels like the Amersham rubies—a stunning and priceless ruby necklace that has been in the Amersham family for generations. When the rubies go inexplicably missing from Lady Amersham’s neck in the middle of the party, the high-spirited Molly must rely on her wits to solve her first case in this charming prequel. 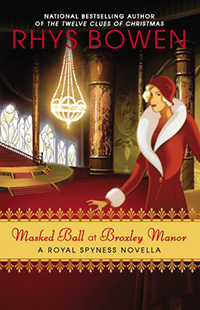 At the end of her first unsuccessful season out in society, Lady Georgiana has all but given up on attracting a suitable man—until she receives an invitation to a masked Halloween ball at Broxley Manor. Georgie is uncertain why she was invited, until she learns that the royal family intends to marry her off to a foreign prince, one reputed to be mad.

When the prince, dressed as the devil, rescues her from an embarrassing situation at the ball, Georgie is surprised to find her unwanted suitor to be a dashing, charming man—especially when he pulls her aside and gives her the kiss of a lifetime. But as the time comes for the unmasking, Georgie’s rescuer vanishes and the party is thrown into chaos, making it clear that everything at Broxley Manor is not as it appears… 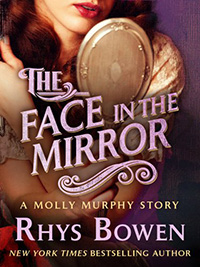 Molly Murphy—Molly Sullivan, now that she and Daniel are finally married—is bored. Having given up her detective agency when she married, she now finds that her life is much less exciting, her days an endless stretch of housekeeping and chores. But when Molly secretly attends a suffragist meeting with her friends Sid and Gus and meets a shy, distracted woman who claims to live in a haunted house, everything is about to change. 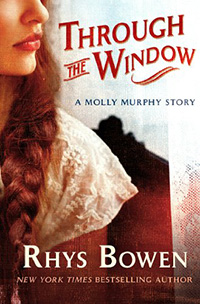 Through the Window: A Molly Murphy Story (2014)

This original story spans the time between The Family Way and City of Darkness and Light, Bowen’s thirteenth novel featuring the beloved private investigator.

Molly Murphy—now Molly Sullivan—is absolutely thrilled to give birth to her first child, a beautiful little boy named Liam. But while confined to bed rest for the weeks following his birth, she finds herself watching the activity across the street through her window, and she soon begins to notice some odd goings-on that set her detective’s sixth sense to tingling. 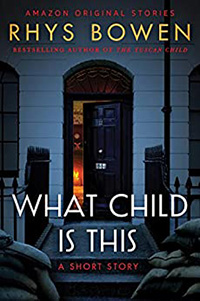 Christmas during World War II is a time for small miracles in this bittersweet short story by the New York Times bestselling author of The Tuscan Child and In Farleigh Field.

Jack and Maggie Harris are adrift on ravaged streets during the London Blitz. Their home is gone. They have nowhere to go and nothing left to lose. With only the memories of their greatest loss—the death of their child during a Christmas years before—Jack and Maggie settle in a seemingly deserted mansion for the night.

Inside they find shelter, warmth, and a bit of cheer. They also discover a surprise. Now, in the darkest of times, the unexpected compassion of strangers will make this Christmas one to remember forever.

If you missed yesterday’s launch event it is now a permanent podcast. Here is the link!

It was a fun chat. I really enjoyed the history and research behind the novels......📖☕️

Which type of food you will offer?

Yet another interview airs today:
The Nerd Daily!
(I’m not sure I’d classify myself as a nerd!) but it’s a lovely, insightful interview

We chat with author Rhys Bowen about her latest release The Venice Sketchbook, writing, book recommendations, and much more!
View on Facebook
·Share

Enjoyed your interview at the Poisoned Pen Book Store today. From your description of the Venice Sketchbook the new Georgie book and the new Molly book I am beyond excited. I am so looking forward to Tuesday.

What a lovely portrait Rhys.

I can't wait to read it!

Being a Nerd is very chic these days. I would claim it!

I have it on order with Audible!

This was an amazing interview. It was almost as cozy as sitting around a cozy kitchen table chatting history and books. 📖☕️

I’ll buy one if you inscribe it. Love and miss you...

I want to join

Launch party today! Excited for this book to be born. And perfect timing for this wonderful interview from the Real Bookclub Queen!

The Venice Sketchbook by Rhys Bowen

What gave me the idea for a WWII story was when I was attending the Biennale-the big international art festival that happens every two years and I saw that there was a festival in 1940 and 1942. And I thought—who attended? The world was at war. So I looked into how Venice fared in the war and foun...
View on Facebook
·Share

Somebody explain to me how I missed the event when my page never went to video.

Love the cover,ordering it today.

I'm waiting for the event to start. Am I missing something?

Oh I wish I had this book tonight...... I’m going to read all night and hope it rains.

Woo hoo! I pre-ordered it. Can't wait to read it!

Am very new here, but not to withtand I wanna a relationship that can lead to married, am very honest man with full of since .you can add me on email account hangout matinsdavidson09@gmail.com